The vestibulo-ocular reflex (VOR) is a reflex eye movement that stabilizes images on the retina during head movement.

To understand the VOR you will need revise your anatomy of the vestibular apparatus; the following video will help.

The VOR produces an eye movement in the direction opposite to head movement, thus preserving the image on the center of the visual field. For example, when the head moves to the right, the eyes move to the left, and vice versa.

To detect dysfunction of the semicircular canal we use the simple head impulse test (also called the head thrust test, or the Halmagyi-Curthoys test, or the Halmagyi test). The patient fixes their vision on a target and the head is turned to the left or right. Normally the eyes remain fixed in the object; the presence of a catch-up saccade or saccades is abnormal.

As slight head movements are present all the time, the VOR is very important for stabilising vision: subjects whose VOR is impaired find it difficult to read, because they cannot stabilise the eyes during small head tremors and this results in oscillopsia.

The VOR reflex does not depend on visual input and works even in total darkness or when the eyes are closed.

VOR suppression test: This test assesses the ability of the vestibulocerebellar system to suppress a vestibular signal. It is assessed by asking patients to follow with the head in the same direction an object that rotates; for example the patient looks at their outstretched hands held together while seated in a chair that rotates. If the vestibulocerebellum is intact then the eyes remain stable in the orbit, with their vision fixed on their outstretched hands, due to suppression of the VOR. In central vestibulocerebellar pathology, this test typically reveals pursuit eye movements, with saccadic intrusions, associated with the presence of  a breakthrough nystagmus during head rotations as fixation is incomplete. 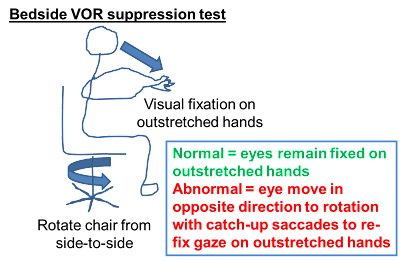 Head Shake Test: Rapid horizontal head shaking for 15 to 20 seconds occasionally results in horizontal post-headshake nystagmus usually (but not always) directed away from the side of a unilateral vestibular loss. When done in specialist clinics Frenzel’s glasses are typically worn whilst doing this test to prevent ocular ﬁxation that can suppress the nystagmus. Headshake nystagmus is  generally thought to occur when asymmetries in resting vestibular tone are exaggerated via brainstem control mechanisms.

Extra reading: Physiology of the Vestibular System, by John Rutka

Posted by Gavin Giovannoni at 11:12